In reading the book I referred to last week, The New Anti-Catholicism by Philip Jenkins, I came across reference to this cartoon from 1875 by Thomas Nast (see a larger [over 1 MB] version here).

The cartoon is called "The American River Ganges," and was published in Harper's Weekly in the September 30, 1871 edition. Here is an explanation of the cartoon:

By the middle of the nineteenth century, large numbers of Catholic children had withdrawn from the significantly Protestant American public schools to attend newly organized Roman Catholic schools. With a large and influential Irish Catholic constituency, the powerful New York City Democratic machine centered at Tammany Hall persuaded the Democratic state legislature to provide public support for the Irish schools. A firestorm of controversy ensued, especially in states like Ohio and Illinois,where the Catholic hierarchy had made similar requests. The controversy re-ignited smouldering Republican nativism, a policy of protecting the interests of indigenous residents against immigrants; and it suddenly became attractive as a vote-getter since that Reconstruction issues appeared to have been resolved. Tammany politicians are shown dropping little children into the “American River Ganges,” infested with crocodilian bishops. The American flag flies upside down, the universal signal of distress, from the ruins of a public school. Linking Roman Catholicism to the Ganges, the sacred river of Hinduism, suggested its exotic un-Americanism and also linked it with what Americans then considered a primitive and fanatical religion.

Interestingly, Nast would make the anti-Catholic nature of the cartoon even stronger four years later: 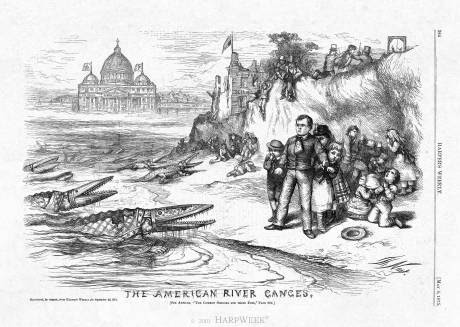 (A very large of this version is found at the Harper's website here.)