The Strife is O’er, the Battle Done… Do You Believe It?

The Siege and Destruction of Jerusalem by the Romans Under the Command of Titus, A.D. 70, David Roberts, 1850[/caption]

Catholics and other Christians living in the United States today often feel as though they are under assault, but the deeper reality is just the opposite: they are the ones who should be confident of their victory. Why? Because that’s what their Captain promised in the sixteenth chapter of Matthew’s Gospel.

Before getting to His words, though, let’s set the table by looking at the cultural context in which we find ourselves today.

As is both well-known and well-commented on, the last several decades have seen a growing fissure between American culture -- both popular and elite -- and Christian sensibilities. Today we live in a society in which the common understanding of morality diverges widely with the Christian understanding, and does so in ways that would’ve been shocking to the World War II generation of Americans. We needn’t catalogue or document this fissure… its current scope and extent is evident.

For many Christians -- including many Catholics -- this is a development that is both unwelcome and (seemingly) unstoppable. Despite our best efforts, there seems little that we can do to derail this cultural train that is so at odds with traditional Christianity. No matter the direction we turn, the losses seem to mount.

The understandable consequence of this reality is a growing sense of defensiveness and need to circle the wagons against the ever-encroaching culture. For many Christians, it’s time to return to the monasteries, spiritually-speaking: to retreat to spiritual oases from which we can continue to draw strength and nourishment in an increasingly harsh and barren cultural landscape. And not just monasteries, but castles with moats and ramparts to protect us from the cultural barbarians at the gate.

There is much truth in this scenario.

A subtle lie, laced with truth, but a lie all the same, and one which many Christians have unwittingly accepted, assimilated and internalized.

As apparently life-like as this portrait may appear, it is nonetheless false, and deeply so. It is a facade.

How, one might ask, can this be so? Look at what’s going on in our culture… on what grounds do I make the claim that this is the greater truth and the earlier truth is the lie?

On the grounds of the words of our Lord Jesus Christ as we find them in Matthew 16.

In the world of Catholic and Protestant apologetics, Matthew 16:18 is one of the most-discussed and commented on passages in the Bible, because of its reference to the place of the Apostle Peter in the church established by Jesus. As the passage tells us, Jesus states that it is on Peter that He will build His Church.

After Jesus tells the fisherman that he is Peter and that on this rock He will build His Church, Jesus says this: “and the gates of hell will not prevail against it.” Because of the sense of solidity given in the previous verse, many Catholics envision the Church as a mighty fortress, as the pillar and bulwark of truth, and rightly so. But in the second verse Jesus switches the metaphor in a subtle change that most Catholics miss.

For most Catholics, the image -- perhaps inchoate -- that comes to mind in these passages is the one sketched above: of the Church under assault from the powers of hell. Fortunately, we can trust in the promises of Jesus that the power of hell will not prevail. And we are right.

But Jesus’ words paint an even more grand reality.

Look again: “and the gates of hell will not prevail against it.”

Consider anew, then, the words of Jesus. If we take His words seriously -- if we trust them, if we embrace them, if we believe them -- then we not only need not fear being conquered by the enemy, but we can have confidence that we are the conquering ones, that we are the ones pressing in on the gates of hell, that -- by the power of Jesus Christ -- we will be victorious.

At the Easter Vigil, Christians celebrate the Harrowing of Hell: Jesus’ descent into hell to free the captive souls of the just who were awaiting His redemptive work on the Cross by which the gates of Heaven would be opened to them. 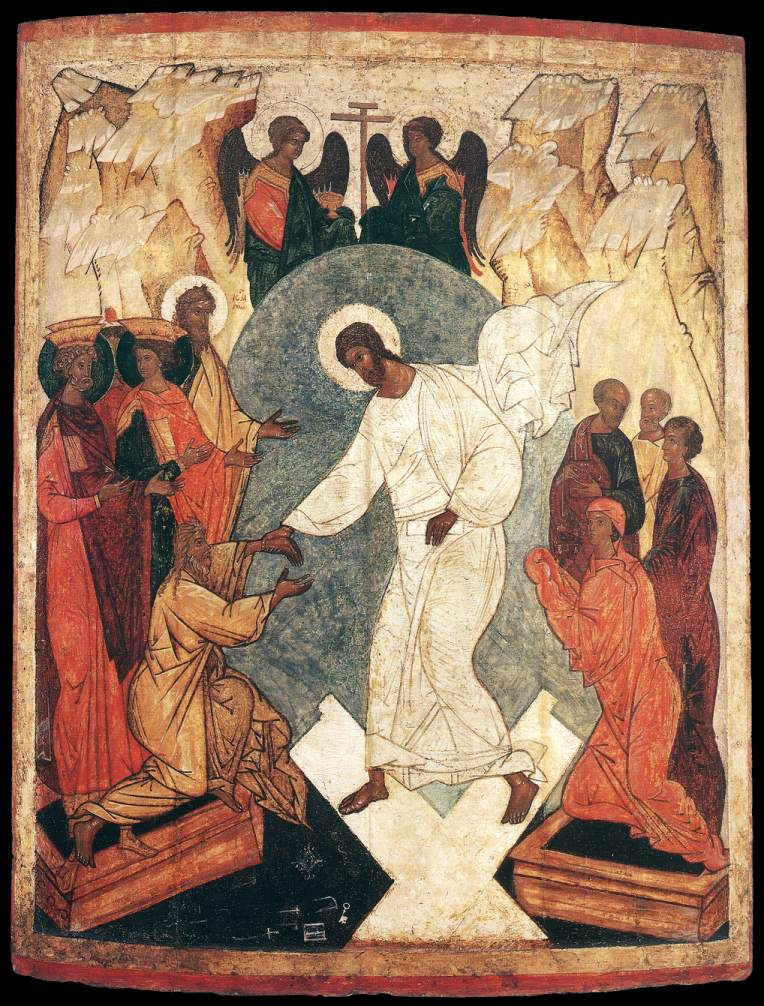 Unknown Russian Icon Painter, The Resurrection of Christ and the Harrowing of Hell, early 16th century[/caption]

But the Harrowing continues, and will continue until the end of time. For while it is true that we can suffer setbacks in the battle against our enemy, the greater truth, the deeper truth, is that all of spiritual warfare since the Resurrection is one great mop-up action: while the enemy can still inflict harm, he is nonetheless running -- fleeing, even -- in full retreat.

We need not cower in fear behind the walls and ramparts. Rather, we ought to raze the bastions and -- with prudence -- engage our foe with the full confidence of final victory. We need not be on the defensive, but instead, should be marching forward, confident in the knowledge that our Captain has already routed the foe.

In the words of the Easter hymn,

“The strife is o'er, the battle done, the victory of life is won; the song of triumph has begun. Alleluia!”

Do not believe the lie of the enemy; live your faith boldly, confident in the knowledge that Christ has already overcome the world and has promised that the gates of hell will not prevail against us!

What are the ways that you are called to live out the victory of Christ in your own life?
Posted by Unknown on 4/12/2015
Labels: Discipleship

First, if the guy who sits behind you at Mass doesn't know you blogged, you have a marketing problem. Second, when I read through your blogs, it is a "product" the devil wants kept under a bushel basket. I need to do my part to lift it up.

That said, this post struck me. There are many stories during WWII where troops looked around what was happening in there particular place and they felt it was a lost cause. They had let their experience or they let big events like u-boat sinking of transport ships transcend their faith in good over evil. It is a form of doubting Christ's promise in these verses.

So it is when we look at our culture and Satan loves to exploit this wavering. "What can I do to maintain good in the face of so much evil. I give up."

But there are stories too in WWII of soldiers who fought in the face of impossible odds for they had faith even if it appeared they were losing or would "lose" their battle, it would contribute to ultimate victory.

At the end of the day (last coming), it will all come out in the wash. The question before me is only whether I fought to the end and believed in the cause. I don't have to win the war by myself (in fact, I can't). I don't have to see victory around me (victory is not of this world). I just have to do my part and not succumb to Satan's propaganda he is winning.

lol... keeping it quiet for a bit was deliberate, Troy... I wanted to get a few weeks' worth of posts up before I told people to come take a look. It'd be kinda weird to have a grand opening with out any product on the shelves, wouldn't it? ;-p

To your point on the post... exactly. We can't win the war by ourselves, nor do we have to... it's already been won! Situations like the ones we find ourselves in today are kind of like Allied troops who came across German soldiers who were still fighting because they didn't know the war was over: they were still dangerous and could do harm, but they'd already lost.

Here's my question for you: this still seems counterintuitive... how can we convince our brothers and sisters not to give in to despair?

Trust the promise of Christ and testify to the Hope that is in is. And then give it up to God/Holy Spirit.

I think it's easier said than done most of the time, though. :-)