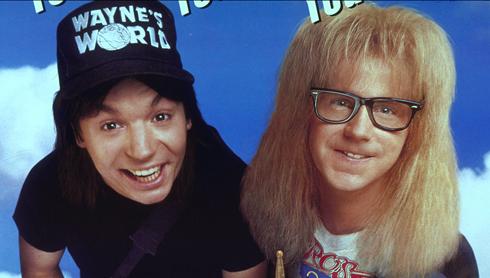 Despite the title of this post and the image above, this is not a post about Wayne or Garth, but rather one that continues the discussion begun in last Monday’s post on Avengers: Age of Ultron.

As I mentioned in that post and in other posts on Christianity & culture, one of my goals with Cruciform is to occasionally offer examples of engaging culture by thinking deeply about the presumptions, messages and questions-posed by the music, movies and other cultural artifacts we encounter. This is what I call playing “movie critic” (as opposed to “movie maker,” i.e. cultural engagement by creating new culture).

In last week's post I looked at some of the more subtle philosophies presented in Avengers. In this post, I’d like to look at one of the more humorous plot points in this blockbuster and its implications…

****(Spoiler Alert! If you haven’t seen the film and don’t like having your surprises spoiled, stop reading this post now!)****

One of central characters in the movie is Thor, currently portrayed in the Marvel Cinematic Universe (MCU) by actor Chris Hemsworth. Both in Marvel Comics and in the MCU, the character Thor is “based on the Norse mythological deity of the same name, is the Asgardian god of thunder and possesses the enchanted hammer Mjolnir.”

In the 2011 film Thor -- in which we are introduced to Thor as portrayed in the MCU -- Thor is stripped of his godly power by his father Odin because of his arrogance. Not only that, but he is additionally exiled to earth along with his hammer Mjolnir, which is now only able to be wielded by the worthy (in Marvel comics, the inscription "Whosoever holds this hammer, if he be worthy, shall possess the power of Thor” is inscribed on the side of Mjolnir). In the course of the film, through an act of self-sacrifice for the sake of others Thor does indeed become worthy, and at a critical moment he regains his godly powers and is once again able to wield Mjolnir.

The inability of anyone unworthy to wield the hammer thus becomes a recurring theme throughout the Thor and Avenger films. In the early stages of Avengers: Age of Ultron, one of the more humorous scenes finds each of the other Avengers attempting -- without success -- to pick up the hammer, with a smirking Thor looking on, indicating that they are apparently unworthy. (At one point, the smirk disappears when Captain America manages to budge Mjolnir ever so slightly.) And then late in the film, all of the Avengers -- including Thor -- are shocked to see one of the new characters in the film (The Vision) nonchalantly carrying Mjolnir, indicating that he is in fact worthy to wield the mighty hammer.

What struck me about this plot point and what I’d like to explore in this post is the notion of worthiness as it is implicitly understood in Ultron and in the other films of the MCU.

I’m struck by the MCU’s notion of worthiness because it’s a concept which is is many ways outmoded in our culture. In our society today, the idea that I might be morally unworthy to do something is incomprehensible and even offensive. Ours is a culture dominated by what Mary Ann Glendon of Harvard Law School calls “rights talk”: “It’s my right to do X,” “Who are you to deny me the right to Y,” etc. It’s as though we have a moral right to virtually everything. Not only that, but we are similarly repulsed by the idea that when it comes to someone’s morality, someone’s character, that there is any “better,” any worthy or unworthy.

And so here comes Thor, with his British accent (aristocracy, social hierarchy, etc.) and his judgmental hammer.

And yet… we do not disagree, we are not offended, we do not take umbrage at the fact that not Iron Man, not Hawkeye, not War Machine, not even Captain America can lift Mjolnir. Why? Because at a fundamental level, we recognize the fallacy of our culture’s exaggerated egalitarianism, of the claim that we are all morally the same. In short, we recognize that some are more virtuous than others. Or to make it more personal… I, Chris, recognize that there are people who are better than me, not just athletically or intellectually, but morally better than me. My culture can tell me all it wants that I’m just as good as anyone else, but deep in my bones I know that that’s not true, I know that there are men and women who live lives of greater virtue than me.

And here’s a final note: in the end, the only characters who are able to wield Mjolnir are a Norse god and a character who, when asked his name, replies “I am… ‘I AM…,’” the name by which the God of Israel reveals Himself to Moses in the Burning Bush in Exodus 3:14 (“Say this to the people of Israel, ‘I AM has sent me to you’”).

In the Marvel Cinematic Universe, then, we find an idea which is both deeply Christian and deeply subversive of a dominant cultural narrative.

And we accept it.

What do you think? Why is it that we struggle in real-life with the idea that some are more or less worthy than others?
Posted by Unknown on 5/31/2015
Labels: Culture

Stock Homes said...
This comment has been removed by a blog administrator.
12:53 AM

Nock Code said...
This comment has been removed by a blog administrator.
1:54 AM