Living the Joy of the Gospel in Our Marriages & Families

Every single Christian couple has an opportunity to be a culture-maker, a culture-builder, insofar as they live vibrant, joy-filled, attractive marriages and family lives.

Friday’s Supreme Court ruling in Obergefell v Hodges, which legalized marriage between two people of the same sex across the country provides an opportunity for me to unpack the second facet of Cruciform’s exploration of the intersection of Christianity & culture, namely, culture-building.

In several previous posts I’ve noting the importance of engaging culture by analyzing and assessing cultural “artifacts”: movies, music, books, etc. (See my two posts on Avengers: Age of Ultron as examples.) This is what I’ve referred to as being a “movie critic” in the broad sense of cultural engagement.

But I’ve also noted that cultural engagement isn’t only about assessment and analysis; it’s not just about being a movie critic: it’s also about being a movie maker. And again, that’s meant in the broad sense of forming and shaping culture in all sorts of ways.

One of the most overlooked yet most important ways in which Christians can be “movie makers” in this sense is in our marriages and in our families. The fact of the matter is, most of us have a relatively limited “sphere of control”: beyond the (also underestimated) power of prayer, there is little that most of us can do to make a visible difference in the lives of people with whom we don’t have a relationship: unless we wield significant political, economic or cultural power, our sphere of influence (let alone control) is relatively limited (again, with the power of prayer as an eminently notable exception).

But with those with whom we do have a relationship, and particularly those in our immediate family, our ability to make a difference and to build up a Christian culture significantly increases.

This isn’t something to be neglected. As the old saying goes, the hand that rocks the cradle rules the world: future generations of Americans receive a fundamental formation and understanding of life as they grow and mature in their homes. This means that parents play an incalculable role in setting the course of our society.

But it’s not just as parents of children that men and women are “movie makers”: it’s also simply as husbands and wives. And it’s in both of these roles -- simply as Christian spouses as well as as Christian parents -- that we are called to make a particular difference in this time and in this country.

On Friday the Supreme Court ruled that two people of the same sex can legally marry in any state in this country. As numerous commentators have noted, in so doing they fundamentally changed the definition of marriage, in that hereto for marriage had been understood not only as a deep bond of love between two people, but as a specific kind of bond that was fundamentally ordered towards childbirth and childrearing.

Now, I don’t want to get into the specifics of this argument, although I’m sure that the discussion over same sex “marriage” will continue, just as the debate over legalized abortion goes on more than forty years after the Supreme Court ”decided” that issue as well. I just want to make one point here: while I am writing this post primarily with fellow Christians in mind, remember that the case for traditional marriage can be made in a completely secular fashion, meaning, without any reference to any religious belief, teaching or practice. But that’s a conversation for another post. (In the meantime, read anything by Ryan T. Anderson, like this article from 2013.)

Live a happy, healthy, holy marriage, a marriage that is joyful and joy-filled, a marriage that endures every storm it encounters with a rock-solid confidence and trust that Christ will rebuke the wind and still the seas. 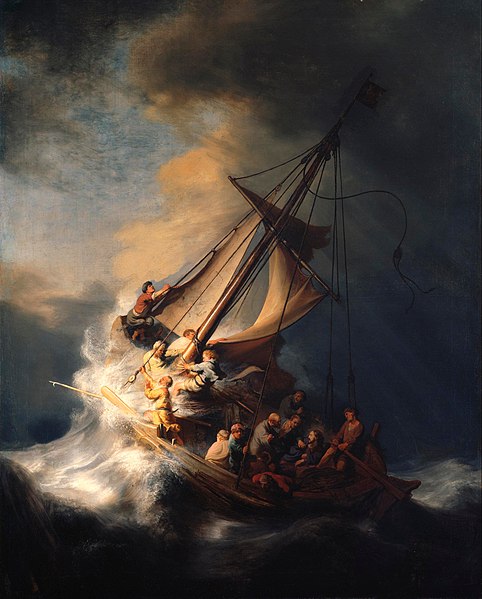 Rembrandt, The Storm on the Sea of Galilee, 1633[/caption]

For while marriage as a legal construct in this country is now open to more, marriage as as societal reality has been suffering in this country for decades, and it’s high time that we start to live in a way that reflects what we believe, about life in general and marriage in particular.

For Catholics in particular, we need to live the teaching that marriage is a sacrament, a visible sign by which God communicates his loving, life-giving, healing, saving and amazing grace.

On Friday Denver’s archdiocesan newspaper, the Denver Catholic, invited Christians to respond to this cultural moment not with despair, but with hopeful excitement:

Jesus Christ is real. We Christians have experienced the sweetness of a personal relationship with Him. Our mission is not to punish or coerce those who have not experienced this—instead, we must invite them into relationship. What better way to do this than to show the joy of living the Catholic faith?

And here’s the thing: it works. Check out the examples in this post, including that of the Catholic author Eve Tushnet, who is attracted to women and yet lives a life of celibacy and embraces Catholic teaching on sexuality. It was the joyful witness of Catholics that lead her from a life of irreligious gay activism to committed Catholicism.

So, start praying as a couple, as a family, for the grace of a joyful marriage, that you might bear witness to the difference Jesus Christ makes in your own home. That’s a prayer that God will surely answer, and when He gives that grace we cooperate with it… fruit will be born, thirty, sixty… even one hundredfold.

How will you answer this call? What are the steps that you will take to live a marriage of joy that bears witness to your faith?
Posted by Unknown on 6/28/2015
Labels: Culture, Discipleship

Great post, Chris. I think there is a tendency for some folks to think that engaging in the "culture war" and building culture are somehow incompatible. But at the heart of this is a spiritual battle, which demands offense, defense, construction, and witness.

What about the oral arguments during the SCOTUS case which said groups which prevent groups that don't accept gay marriage should be removed from tax exempt status? As well as the schools attached tot hose institutions? How you accept that?

sk, can you say more about your comment? How do I accept what, exactly?