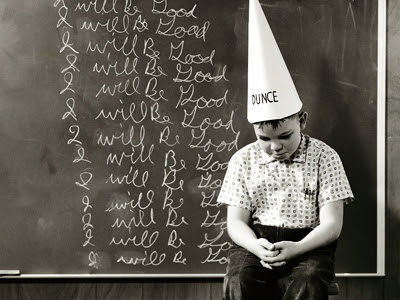 Something I've realized over the last several years is that people who are not very familiar with the Christian (specifically Catholic) tradition on sin -- and this includes both Catholics and other Christians -- tend to associate belief in sin with backward, repressive, irrational thinking. In other words, to seriously call something "sinful" implies that you are irrational and backward, that you are restricting yourself from achieving happiness by submitting to an apparently arbitrary and irrational moral code.

What is somewhat ironic about this is that in the classic Catholic teaching, sin itself is what is irrational. Note the definition of sin as found in paragraph 1849 of the Catechism of the Catholic Church:

Sin is an offense against reason, truth, and right conscience; it is failure in genuine love for God and neighbor caused by a perverse attachment to certain goods. It wounds the nature of man and injures human solidarity. It has been defined as "an utterance, a deed, or a desire contrary to the eternal law."

Sin is defined as first being an offense against -- what? -- reason. According to the Catechism, a sinful act is an act against right reason, i.e. it is an irrational act. This same idea was taught by St. Thomas Aquinas in the 13th century; Thomas wrote in his Summa Theologiae that -- among other things -- sin is "contrary to reason" (I-II, Q. 71, A. 6). This understanding of sin is aptly explained by the 20th century german philosopher Joseph Pieper in his book, The Concept of Sin. Pieper also shows how -- again, according to long-standing Catholic thought -- a sinful act goes against our nature. In other words, to commit a sin is to in some way deny or prevent the fulfillment of what it is to be human.

So, contrary to widespread intuitions today, to believe in sin is not to be irrational, but in fact to commit sin is irrational. This furthermore means that one can discuss the sinful character of particular actions in the context of public policy discussions, because this sinful character can also be considered the irrational character of such actions. I'm not advocating using the word "sin" in this sort of format -- precisely because of the common misunderstanding of its meaning -- but rather I am arguing against a tendency to throw out arguments because they discuss acts in terms of sin "instead of" reason. In fact -- as I have shown above -- sins are by definition irrational, and this feature allows us to make arguments against such acts that can't be dismissed by categorizing them as "arguments from sin".

How might this understanding of sin change how you discuss this topic with others?
Posted by Unknown on 5/19/2015
Labels: Discipleship

I think that there are a lot of people that don't really know what reason is. Once one gets a real grasp of the concept of reason one has a tool with tremendous power. Reason not only can help us make good decisions but can also be a source of knowledge.

Reason really is a broad topic, and one that has direct implications for many of the things I hope to address here at Cruciform, Doug... thanks for mentioning that!